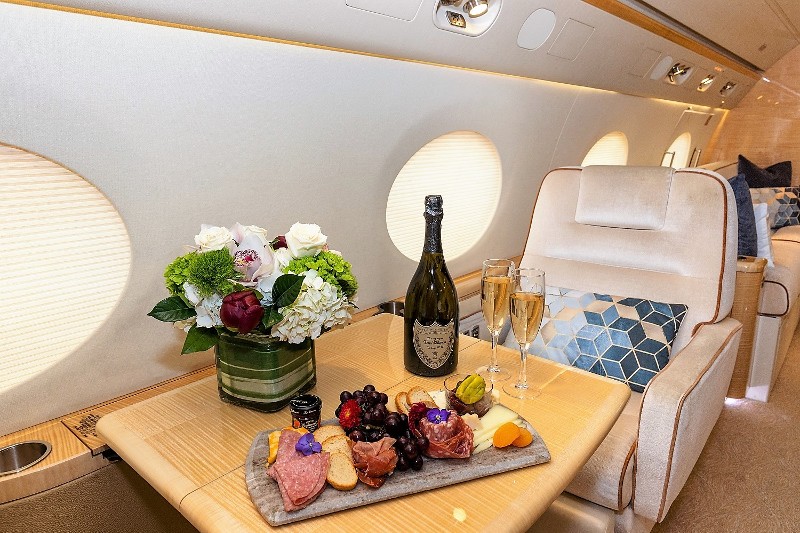 Elite Jets has added a seventh luxury jet to its fleet, a sleek Gulfstream G550 capable of nonstop flights from Naples to Central and South America, Europe, Asia and Africa.

The fuel-efficient Gulfstream G550 can accommodate up to 18 passengers and offers superior safety ratings, leather reclining seats, a full restroom and deluxe amenities like an onboard entertainment system, Wi-Fi and personalized temperature controls.

With a range of 6,750 nautical miles, the Gulfstream G550 is capable of flights lasting up to 15 hours. Elite Jets provides multiple pilot teams for long-haul flights.

“Some of the largest commercial jets cannot fly as far as the Gulfstream G550,” said Stephen Myers, executive vice president at Elite Jets. “Whether it is busy executives pressed for time or leisure and luxury travelers flying for safety and convenience, they want to be efficient and prefer not to stop for flight crew swapping or needless refueling. This jet expedites cross-country and international travel, bridging the gap with destinations like California, Hawaii, London, Paris and even Tokyo and Seoul.”

Elite Jets is providing professional management services for the Gulfstream G550 and a Hawker 850XP through a Charter Revenue Program, which allows jet owners to generate revenue when an aircraft is not in use by the owner. The company has hired three pilots to captain the Gulfstream G550 – Rodrigo Frighetto, Brian Wilkins and Sergio Guimares – and a flight attendant, Stacey Victoria Stelmach.

Frighetto is a licensed pilot in the U.S., Brazil and Qatar who most recently served as a captain transporting VIP passengers on international flights aboard a Gulfstream. He has worked as a private pilot for two decades on turboprop and jet aircraft, and has flown to countries on six continents.

Wilkins has accrued eight jet type ratings and has been a professional pilot for 20 years in roles as an instructor, captain and director of safety. As the director of aviation for a college-level program, Wilkins helped U.S. veterans achieve their goal of becoming pilots after returning from overseas.

In addition to the Gulfstream G550 and Hawker 850XP, Elite Jets owns four Embraer Phenom 300s and one Embraer Legacy 500, as well as a Bell 407 Jet Ranger helicopter.

Elite Jets operates from a private terminal at Naples Airport. It is the only Southwest Florida-based charter service offering a Gulfstream G550 and the only company with hangar space large enough to store the aircraft indoors.